Manuela Hartel is a German media and performance artist. She studied media art at the AdBK Munich, performance at the American Institute Vienna and singing at the Centro Professione Musica in Milan. She realizes video installations for exhibitions, theatres and opera stages such as the Bavarian State Opera, the Junge Oper Stuttgart, the Jewish Chamber Orchestra Munich, the ETA Hoffmann Theater Bamberg and in collaboration with an international, contemporary dance and theatre scene. 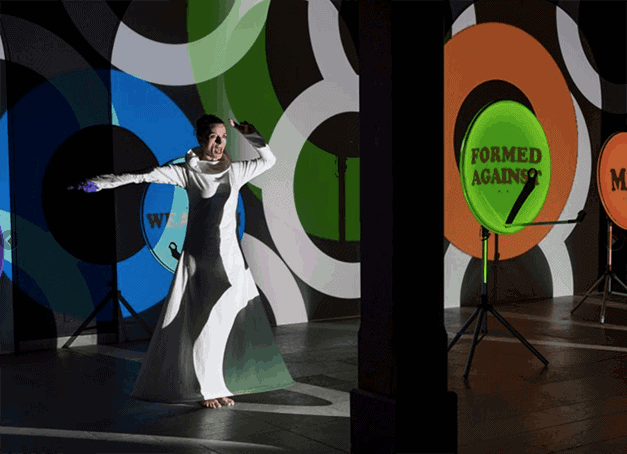 In her artistic practice, Manuela Hartel interweaves elements of performance, video, installation and music with space. Her focus is on transformative processes, synergetic concepts, perception in the field of tension between nature and the supernatural, as well as the meaningfulness of our existence in the context of faith, religion and ritual. It deals with tendencies of demarcation as well as aesthetic similarities between the natural and the artificial and the possibility of establishing contact with our own inner constitution. Her video, spatial and sound installations form inspired spaces of reflection and association with challenging, visual quality.

Manuela’s performances and video works have been shown in Shanghai, Guangzhou, Palermo, Skopje, Locarno, Zurich, Salzburg, and Munich since 2003. In 2017, she developed BELOVED! during documenta14 in Athens. In the same year, she was represented at the Venice Biennale 2017 with a video work.

She stages her own video music performances in a variety of locations, which she expands and transforms with video mappings. She works as a performer on stage with voice and text, integrated into her set design and into the images of her video projections. She is supported by musicians and composers of new and electronic music.

Manuela Hartel’s numerous productions, including Rites de Passage (2012), Set Fire to Flames (2015), No Weapon Formed Against Me Shall Prosper (2016), BELOVED! (2017) and EMBRACE (2018) have been shown at home and abroad. Manuela Hartel received several project fundings from the City of Munich and the Biehler von Dorrer Stiftung. She lives and works in Munich, Bavaria.